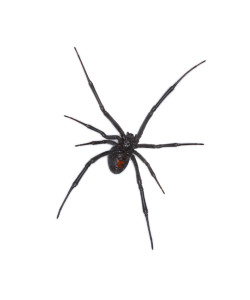 The venom of a black widow is 15 times stronger than that of a rattlesnake.  Black widow spiders will typically emerge during early spring.  When it cools down in October they are more visibly seen due to living in dark corners during the summer to stay away from the heat.  Each female black widow can store the male’s sperm after killing the male and she can keep producing egg sacs without mating again with hundreds of eggs in each sac.  The black widow spider is usually found in cool and damp places such as inside the garage doors, water drainage pipes around the foundations of the homes, inside gutters, under outside furniture, underneath the house siding, inside sheds, by woodpiles, under decks and occasionally under the eaves.